Norse Mythology Guess Who! is a great addition to any study of Norse mythology or Viking history. The game board and cards feature 24 Norse gods, goddesses, and mythical creatures. Game cards feature a short statement about their character. Play this game to learn the name of important characters in Norse mythology, or bring the cards out at the end of the unit as a review!

There are various spellings for the beings in Norse mythology. I have chosen to match my spellings to D’Aulaire’s Book of Norse Myths. Some of the animals featured in my cards are not named in the book and so then I have picked what seems to be a popular spelling.

*IMPORTANT*
The game cards have been created to fit this version of the Guess Who game, this is a digital download that does not include physical game boards.
https://amzn.to/3suzG5Z

There are no reviews yet.

Only logged in customers who have purchased this product may leave a review.

_starlitday_
•
Follow
Do Over! I asked the kids how they wanted to start the day, and they wanted to re-do the chromatography experiment with markers! We grabbed three different markers from around the house: a "baby" crayola, a craZart, and an Expo marker. We went through the same process: We asked a question, "Are black markers really black?", we wrote down our hypothesis, our materials, set up our experiment, and wrote down our procedure. This experiment moves pretty quickly, but we set it aside to check on through the morning and came back later to record and analyze our results. It was fun to include a white board marker that didn't change at all, and wow! The CraZart marker is so pretty! We concluded that black markers are usually made up of lots of different colors. This was originally supposed to be a tie-back to the first GL, and to alchemy, showing that we can separate things that are mixtures into their component parts, so we discussed that too. ___________________________________ #homeschool #montessori #diymontessori #homeschoolmontessori #montessoridiy #montessoriathome #montessorihomeschooler #homeschooler #unitstudies #amplifyckla #renaisssance #homeschoolhistory #historyunitstudy #ckla #montessorihistory #renaissancescientists #firstdayofschool #homeschoolhistory #homeschoolscience #alchemy
View on Instagram |
1/8

_starlitday_
•
Follow
A liiiittttttle bit of a stretch here, but I went with it: The other week, with @megperotti and her kids, we mixed natural substances to make paint. Then, in the First GL, we dissolved sugar in water/mixed sand in water to demonstrate a solution and a mixture. I wanted to introduce alchemy, talk about separating solutions, and do a little scientific method writing. I wrote up a story about alchemy and we did a chromatography experiment. We collected different colors of leaves, crushed them up, covered them in rubbing alcohol, baked at 250F for an hour, then dipped in kitchen roll strips and let the colors climb up. This was fine, but we didn't really see different colors, just different shades of green and brown. For the purposes I wanted, we would have been better off doing a similar experiment with black marker on a strip of kitchen roll, dipped in water to let the water creep up the paper and separate out the different colors in black ink. Oh well. We did discuss why the colors were so similar across the strips, all in shades of green, and had both a discussion about chlorophyl and making mistakes! And we did our lab report style writing too. We'll either circle back to the marker version of the experiment, or I'll just set it up sometime and let the kids look so that we can have the discussion about separating solutions. ___________________________________ #homeschool #montessori #diymontessori #homeschoolmontessori #montessoridiy #montessoriathome #montessorihomeschooler #homeschooler #unitstudies #amplifyckla #renaisssance #homeschoolhistory #historyunitstudy #ckla #montessorihistory #renaissancescientists #firstdayofschool #homeschoolhistory #homeschoolscience #homeschoolfail
View on Instagram |
2/8

_starlitday_
•
Follow
First GL Follow Up We've had a lot of fun with some GL follow ups this week. - We did the same galaxy art project linked by @ourdiscoverymontessori and @montessoriinspiredco ... but I can't remember where the original came from! - Both girls have been pretty enthralled with the periodic table puzzle. Something is drawing them both to it. Both also were super pleased to see our element cards again, but haven't touched them. I'm planning to do a little work where I compare the two myself next week and see what happens... - I bought wooden planet sets at the end of last year with leftover charter funds. They've been having fun looking at planet pictures and painting. An Amazon search tells me that they aren't currently available :( - Repetition of the solid/liquid/gas experiment. The girls have done this together a couple of times. I have a couple of other follow up works to bring out, a lesson to give based on something the girls did in their sciene class last week, and, when we get to alchemy in our unit study, I'll link that to stellar nucleosynthesis. Lots of fun to come! ___________________________________ #homeschool #montessori #diymontessori #homeschoolmontessori #montessoridiy #montessoriathome #montessorihomeschooler #homeschooler #cosmiceducation #montessorigreatlessons #montessoricosmiceducation
View on Instagram |
3/8

_starlitday_
•
Follow
Surface Area of Platonic Solids My oldest and I brought the Platonic solids back out today. Her math work hasn't been very photogeneic lately and it was nice to get back to some hands on work with her. We began by studying a cube. I asked her if she remembered how to find the area of one side of the cube, and how she could use that knowledge to find the areas of all sides of the cube. Pretty straighforward. Next we looked at the tetrahedron. As a reference I had on hand one of my DIY Iron Material frames, which proves that the area of a triangle is bh/2. This was all well and good, and provided an excellent opportunity to look at cancelling out in fraction multiplication. Since the octahedron and icosahedron are also made from triangles, we could use the same process to come up with surface areas for those, referring back to last week's tables to remember how many sides each shape has. The dodecahedron appears to be trickier - but, there's an iron material for that! I used the pentagon frames to demonstrate that a pentagon can be broken down into five triangles, with the side length as the base and the apothem as the height. I love the hands on concrete materials. Surface area isn't a topic that comes up very often, and having the physical materials around really helps jog memories! ___________________________________ #homeschool #montessori #diymontessori #homeschoolmontessori #montessoridiy #montessoriathome #montessorihomeschooler #homeschooler #unitstudies #amplifyckla #renaisssance #homeschoolhistory #historyunitstudy #ckla #montessorihistory #renaissancescientists #firstdayofschool #homeschoolhistory #homeschoolscience #leonardodavinci #montessorigeometry #platonicsolids
View on Instagram |
5/8

_starlitday_
•
Follow
First GL/Renaissance Follow Up Scheduling the first Great Lesson at the beginning of this week was perfect for several reasons - we're starting to get into some of the later Renaissance scientists, particularly those who thought about our solar system. Today I read "Nicolaus Copernicus The Earth is a Planet," aloud to start our day. We discussed/remembered what the Ancient Greeks had thought about the solar system and used compasses to draw models of both systems. Pro Tip: I tightened the screws on our compasses before we got started with our day. A compass that doesn't hold it's angle is really frustrating. Ours were nice and tight, and no one complained that they coudn't do it! I have one compass that has a built in measuring guide, so my little used that one. (Helix brand plastic compass - I'highly recommend it for beginners!) My older set her compass to a ruler, making the radius of each circle about 1/2cm larger than the last. We also completed another Writing Revolution style sentence expansion activity detailng when, where, and what Copernicus discovered. ___________________________________ #homeschool #montessori #diymontessori #homeschoolmontessori #montessoridiy #montessoriathome #montessorihomeschooler #homeschooler #unitstudies #amplifyckla #renaisssance #homeschoolhistory #historyunitstudy #ckla #montessorihistory #renaissancescientists #homeschoolhistory #homeschoolscience #renaissance #renaissanceunitstudy #thewritingrevolution #writingrevolution #montessorifirstgreatlesson #montessoricosmiceducation
View on Instagram |
6/8 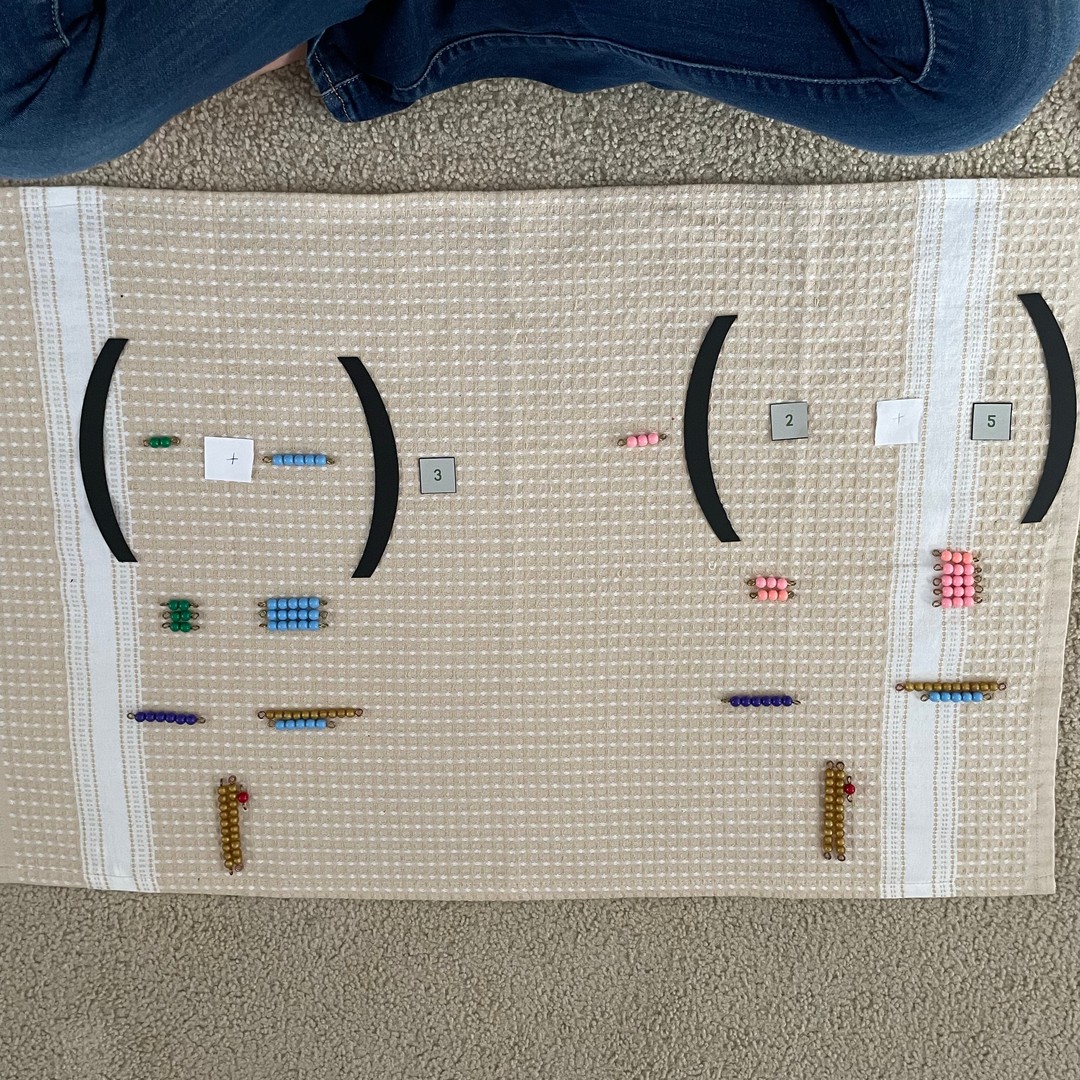 _starlitday_
•
Follow
First Great Lesson 2022 This year our first great lesson happened under a shady tree with friends. I used @rhymeandreasonacademy's script pretty much word for word, just adding in a couple of facts I knew they my kids already knew. I liked that her script was very scientific and in depth. Visuals-wise, I used a mixture of charts from my Keys of the Universe albums, and pictures from the book Born With a Bang. I actually wasn't sure that I'd tell the great lessons this year, but GL1 fits so well into the current section of our Renaissance study - we're just about to compare the Ptolemy model of the solar system with the Copernican one (and then the Kepler model in a week or so). I told the Grandfather Rock story last week, and my little one ate it up so that convinced me - Great Lessons are in this year! To gain buy-in from oldest I asked her if she'd like to assist me and do the experiments while I told the story. The evening before, as I was gathering supplies, we talked through the experiments and tried a couple out. I switched @rhymeandreasonacademy's penny melt demonstration for ice melting/boiling, so we tried that. She also helped me check that we had everything we needed packed and ready to go. Bad photos are by me. Good photos are by @megperotti ;) ___________________________________ #homeschool #montessori #diymontessori #homeschoolmontessori #montessoridiy #montessoriathome #montessorihomeschooler #homeschooler #cosmiceducation #montessorigreatlessons #montessoricosmiceducation
View on Instagram |
8/8
View on Instagram

No products in the cart.